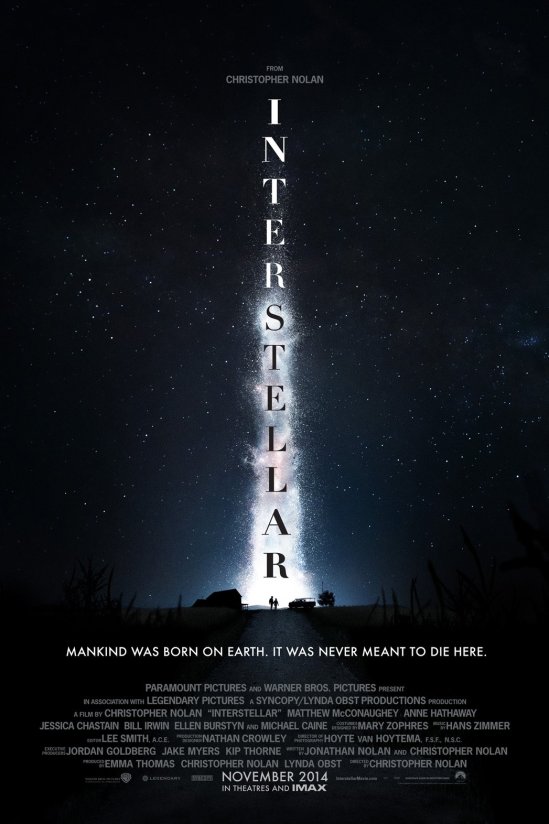 Not wanting to be outdone by all of the hullabaloo in the South of France, Warner Brothers and Paramount* have just dropped the eagerly awaited, first full-length trailer for Christopher Nolan‘s space opus, Interstellar which features Matthew McConaughey in his first post-Oscar flick.

This is also Nolan’s first since The Dark Knight Rises and details surrounding the film have been more closely guarded than the formula for Coke or the combination to the vault at Ft. Knox (seriously – look it up on imdb and it says “plot unknown”). Even after watching the trailer repeatedly, I’m still not exactly sure what it’s about. It seems that the human race has finally made such a mess of this planet – to the point that we’ve run out of food – that space travel is no longer a pipe-dream, but a necessity.

Jessica Chastain also stars, although I’d forgotten she was in it until I caught the brief glimpse of her standing in burning field, as does Anne Hathaway whom it took me a 2nd viewing to realize that was her underneath the space helmet.  I did catch a peek of Casey Affleck, along with David Oyelowo, who seems to be doing a take on his Rise of the Planet of the Apes stuffed shirt, and Nolan mainstay Michael Caine. Timothee Chalamet and Twighlight’s Mackenzie Foy play McConaughey’s kids. The film costars Wes Bentley, Topher Grace, David Gyasi, Bill Irwin, Elyes Gabel and William Devane, John Lithgow, and Ellen Burstyn, plus a cameo from Matt Damon.

Interstellar takes off on November 7, 2014 on most of the planet, including the US and the UK (positioned smartly for awards-season attention). More will surely follow before then, maybe even the plot.

*and they didn’t even have anything to do with Grace of Monaco.

Romance with a Side of Danger

The Fund for Horses Official Blog

An Arts-Filled, Tasty And Sometimes-Loopy Jaunt Through Life

"You're only given a little spark of madness. You mustn't lose it." Robin Williams

the stories behind the pictures, and vice versa

zany dog exploits - and other tails

Just adjust your idea of "fine".

A blog about writing and self publishing

Made by margie
Drink What YOU Like
Kim Cleary